When thousands of people gather for a cause, isn’t that news?

You wouldn’t know it with the lack of coverage of the Life Chain in the Des Moines Register. Don’t worry, Quiner’s Diner was there.

This was an ecumenical movement. I was standing in front of First Assembly of God Church on Merle Hay. We had several hundred folks in our little section of the street (which stretched several miles every direction). Walnut Creek Community Church had 127 folks from their church alone, prayerfully and respectfully standing along the road, most of whom were teens or young adults.

I talked to people from the Cathedral, First Assembly, All Saints, and of course, my parish, Holy Trinity.

Up near St. Theresa’s at Merle Hay and University, presidential contender, Rick Santorum, the most pro- 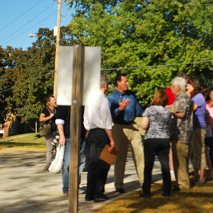 life candidate this year, joined the Life Chain. Mr. Santorum is the real deal when it comes to Life issues.

I talked to an interesting woman from Walnut Creek Community Church. She is interesting because her mother attempted to abort her three times in 1961 when abortion was still illegal in every state.

Her mother lived in California. She was pregnant out of wedlock. She was getting major pressure from family members concerned about the stigma associated with these situations then.

Her sister found her an abortionist, who on three separate occasions tried using the “hook” to abort the woman to whom I was talking. She was situated too high in the womb for the abortionist to accomplish the deed.

Her mother raised her and treated her very well. At the age of thirteen, she tearfully told her daughter that she had tried to abort her three times. She apologized. She begged for forgiveness.

And the daughter forgave.

As I talked to this woman who is now fifty, I said that I sensed no bitterness or anger in her. In fact, her eyes twinkled with happiness. She said, “heck no, I’m not bitter. Jesus told us to forgive. That’s what He’s all about, isn’t it!”

She loves her mother, who is now sixty-nine.

She said something important: “I am so glad I was born. If I hadn’t been, we wouldn’t even be talking right now.”

It hit me. When we talk about choice, we’ve got it turned around. The people we should be talking to are the ones in the womb. This stranger on the life chain yesterday speaks on behalf of all the pre-born with her resounding endorsement of life:  “I am glad I was born.”

That’s news you won’t see in the newspaper.