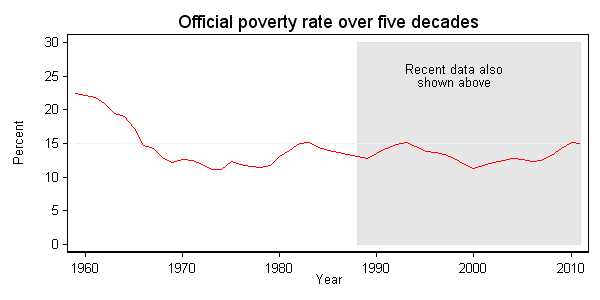 Here’s the question I received from a self-identified liberal Quiner’s Diner reader on the impact of the welfare state:

“Would you concede that neither of us has any statistically significant evidence to prove our respective points?”

It’s a good question. I appreciate the spirit of the query, since this reader has demonstrated an interest in more fact-based discussions of the issues than the typical liberal.

In response to the question posed above, evidence is very much stacked against the efficacy of the welfare state

enacted under Lyndon Johnson’s Great Society Programs beginning back in the late 1960s.

You can see above that the poverty rate was in a free fall in the 1960s. But rather than continuing to drop as government welfare programs were rolled out, the rate leveled off. Current rates are about the same as they were back when the Great Society was launched, despite trillions of dollars thrown at the problem.

These programs very much targeted African-Americans. How did they work? They gutted their families, miring many in an inter-generational welfare cycle.

The average seventh to eighth grade white kid tests better than a black  twelfth-grader. This is certainly a multi-faceted problem. But there’s no doubt that, on average, black kids attend inferior schools than white kids. Conservatives encourage  programs such as school-choice and vouchers to liberate black kids from their ghetto schools, but liberal politicians block these initiatives.

They pour money into select urban schools without a proportionate return on investment. For example, Washington D.C. has the dubious distinction of being toward the bottom of the rung in academic achievement for their students, even though they spend more than any other, some $29,000 per student per year.

Take security. Seven to nine-thousand blacks are murdered every year. Despite a lot of talk about racist prison sentences and hate crime, 94% of blacks are murdered by other blacks. A young black man is much safer being sent to war than growing up on the urban streets of America.

In the early sixties, three out of four Black kids lived with their married mom and dad.

Today, it’s only one out of three.

The systematic destruction of the Black family has led to an explosion of social pathology amongst our Black brothers and sisters.

It gets even worse when you look at birth rates. Some 53% of black babies are aborted, which has lowered the Black birth rate below replacement level. The Black community in America is slowly dying, one abortion at a time.

Today, Blacks enjoy more political clout than at any time in our history. We have 44 African-Americans serving in Congress. We have an African-American president. And yet with their growing political clout, they continue to overwhelmingly support the Democratic Party which promotes the very policies that have been so deleterious to America’s Black community.

President Obama garnered some 95% of the Black vote despite the fact that he promotes human abortion as a way of controlling unwanted human beings; he fights school choice and vouchers tooth and nail, miring Black kids in underachieving schools; and he supports and expands welfare programs that breed dependence and stagnation.

The political philosophy of Barack Obama and his fellow liberal elites has been poison to Black America.

No, the key to saving the African-American race is certainly not more abortion.

What they need is more family.

African-American kids simply need a mom and a dad bringing them up. Great Society programs subsidized illegitimacy. Whenever you subsidize anything, you get more of it.