Class warfare is the foundation of the Democrats’ economic philosophy.

The poor are virtuous and deserve to have money redistributed to them from their oppressors, the rich.

By the same token, the rich are greedy and have achieved their lucre on the backs of the downtrodden poor whom they have exploited.

Their philosophy views a nation’s wealth as a zero-sum game in need of liberal elites, like themselves, to slice up the pie and serve it up according to their altruistic egalitarian principles.

For seven years, this nation has been led by the most liberal president in history.

For the first two years, he was supported by the most liberal Congress in history, and the next four, his party still controlled the Senate. That gave President Obama six years of control over the government to implement his economic reform and assess its results.

How did it work? At Tuesday night’s Democratic debate, not one candidate supported the results:

“I think most Americans understand that our country today faces a series of unprecedented crises. The middle class of this country for the last 40 years has been disappearing. Millions of Americans are working longer hours for lower wages, and yet almost all of the new income and wealth being created is going to the top one percent.”

“I think what Senator Sanders is saying certainly makes sense in the terms of the inequality that we have.”  [Inequality] “hasn’t been this bad since the 1920s.”

“What I’m talking about is this, our middle class is shrinking. Our poor families are becoming poorer, and 70% of us are earning the same, or less, than we were 12 years ago. We need new leadership, and we need action.”

In fairness, presidents generally receive more blame for bad economies and more kudos for good economies than they deserve. Mr. Obama is no different.

With that being said, what does the economy look like after seven years of liberal government economic policy? Well, the stock market has done great, to the benefit of the rich who own most of the stocks. The prodigious growth in stocks is more likely attributable to monetary policy than anything else.

On issues that are especially key to Democrats, such as wages and jobs, results are terrible.

Wages are falling, as you can see in the graph below: 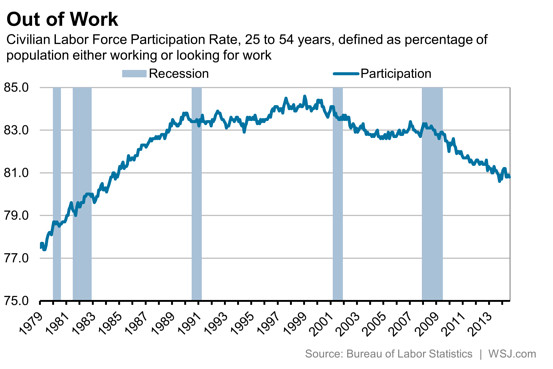 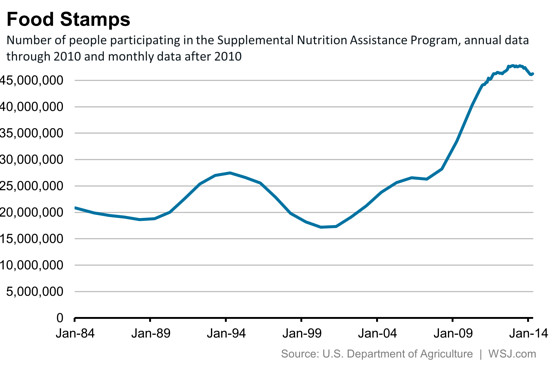 What is most disturbing about the crop of Democratic candidates who debated earlier this week are their proposed solutions: more of the same.

Despite the discouraging economy under Obama and his party, they call for more government control over the economy; even more expansive and expensive regulations; more entitlements; even more tax increases; even more deficit spending; and even more stimulus spending. And, of course, a hike in the minimum wage.

These are not serious proposals in light of the economic record presented above.

Republicans have an opening to present a positive plan of prosperity and economic growth. In light of the Obama economy, we have no where to go but up.