Right before your very eyes, you’re watching a baby struggle for life. With immediate medical intervention, she might live. Without it, she will be dead shortly.

What should you do?

This is isn’t a hypothetical question. It happens when abortions take place. Sometimes the abortion “fails” and the baby is born alive. I wrote about just such an occurrence last summer when I heard Melissa Ohden speak (“Life is Beautiful.”)

Ms. Ohden’s Mom aborted her, but Melissa didn’t die. She struggled for life on a cold slab. The medical personnel attended to the Mom and assumed Melissa was dead. When the nurse noticed she was, in fact, still breathing, Iowa law required that prompt medical attention be provided in an attempt to save the life that the doctor had tried to end moments earlier.

Is this a good law?

What an important question in light of the shifting landscape on matters of life and death.

Yesterday, I wrote about Pete Singer and his nihilistic philosophy. He wrote an article called “Sanctity of Life or Quality of Life,” in the 1983 issue of Pediatrics, which is the official journal of the American Academy of Pediatrics. It is amazing a serious journal would provide space to this type of thinking:

“If we compare a severely defective human infant with a non-human animal, a dog or pig, for example, we will often find the non-human to have superior capacities, both actual and potential, for rationality, self-consciousness, communication, and anything else that can plausibly be considered morally significant.”

Mr. Singer considers the dog or pig more morally significant than a human being. But this bothers him not at all:

“Is the erosion of the sanctity-of-lifeview really so alarming? Once the religious mumbo-jumbo surrounding the term ‘human’ has been stripped away … we will not regard as sacrosanct the life of each and every member of our species. [Instead], we may start to look at human life as it really is: at the quality of life that each human being has or can achieve.”

Are Mr. Singer’s views really so far out any more? Fast forward eighteen years to Illinois. Their state legislature is 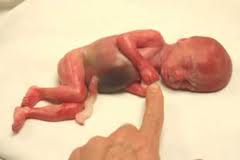 This baby boy, Rowan, was aborted at 21 weeks, survived, and was left to die.

attempting to pass an “infant born alive” bill like Iowa has, you know, the one that saved Melissa Ohden’s life. A single state senator refused to vote for the bill. His name was Barack Obama. Please understand that without this bill, the Melissa Ohden’s of the world are left to die.

She was a nurse at Christ Hospital in Chicago where she discovered babies were being aborted alive ala the Pete Singer philosophy. Interestingly, the Reverend Jeremiah Wright served on the Board of Directors for Evangelical Health Systems, the parent company for Christ Hospital that was aborting babies born alive.

Jill Stanek testified before Congress on these atrocities, upon which, Christ Hospital fired her. However, her testimony led to passage of a national born alive piece of legislation that passed unanimously in the Senate.

Barack Obama was against it and refused to vote for a similar piece of legislation three times at the state level when he had a chance.

Mr. Obama and his religious mentor, Mr. Wright, were not scrutinized on this matter by the mainstream media four years ago. This is significant because the same media is scrutinizing Rick Santorum’s every word. They are trying to depict him as loony for putting human life on a pedestal at the same time they honor Barack Obama for dismissing it as if it is a disease in need in eradication.

Mr. Obama takes Pete Singer’s message to heart that we need to strip away this religious mumbo jumbo surrounding what is human. To that end, the Obama Mandate imperiously strips away all religious conscience rights from faith-based organizations.

Pete Singer’s philosophy, as discussed these past two days in this blog, is slowly but surely moving into the mainstream championed by Barack Obama who is pulling his pliable party along for the ride.

The Democratic Party IS pliable. They go where the votes and money are on critical life issues as shown in Sunday’s post (“The evolution of principle”).

The philosophies of Pete Singer and Barack Obama vary in degree, not substance.

How in God’s name were so many Christians fooled by this man?