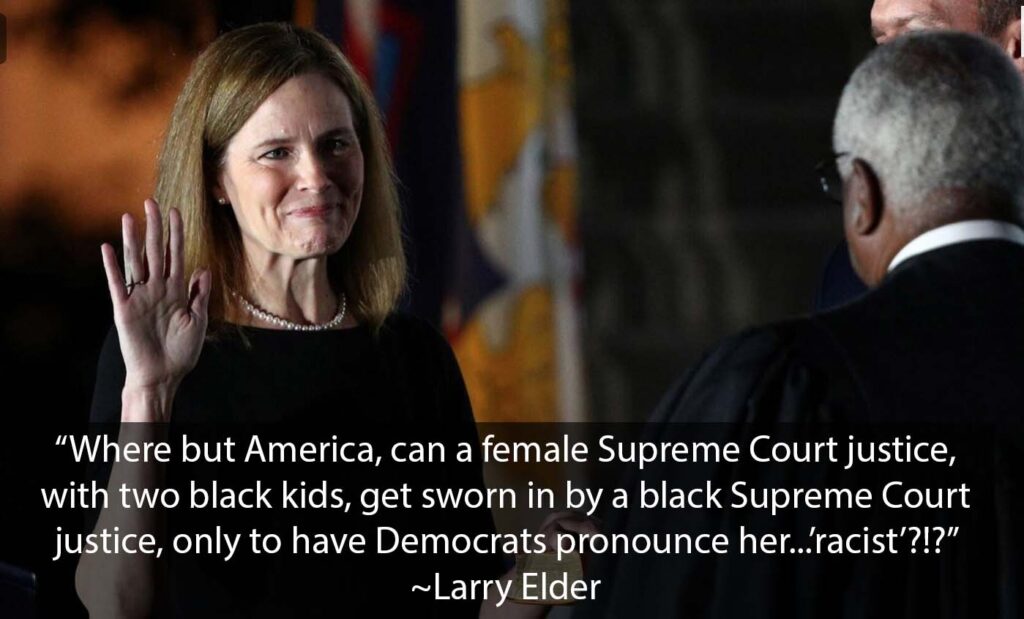 By Tom Quiner Amy Coney Barrett believes in originalism when it comes to deciding cases before the Supreme Court. In other words, she decides cases based on what the law says and what the words meant when the law was written. Democratic Senator Ed Markey, suggests her entire approach is racist, which means he thinks…

First there was the Biden Doctrine.

Then-Senator, Joe Biden, intoned in 1992 that President George H.W. Bush should “not name a nominee until after the November election is completed.”

Even more, the Senate Judicial Committee “should seriously consider not scheduling confirmation hearings on the nomination until AFTER the political campaign season is over.” [Emphasis mine.]

In other words, if a vacancy arose on the Court during an election year, the current president should take a pass on nominating a replacement and defer to the newly-elected president.

In 2007, Chuck Schumer embraced the Biden Doctrine, doubling down on their obstructionist philosophy in this speech to the American Constitution Society…

“I … think there is a disadvantage from having (five) Catholics, three Jews, everyone from an Ivy League school.”

I have a legitimate question for the Justice Sotomayo: why?

“Some will rejoice in today’s decision, and some will despair at it; that is the nature of a controversy that matters so much to so many. But the Court has cheated both sides, robbing the winners of an honest victory, and the losers of the peace that comes from a fair defeat. We owed both of them better. I dissent.” — Justice Anthony Scalia

I oppose Obamacare. It is an immoral piece of legislative chutzpah that hides taxpayer-funded abortion in its 2700 pages of Rube Goldberg-inspired legalese. It has led to the imposition of services on Catholics and other people of faith that force them to violate their conscience or face severe sanctions from the State. And it was sold as a way to reduce our federal deficits. It turns out, according to the Congressional Budget Office, that the president and his party were wrong. Obamacare is going to bust our already shattered bank and grind us into the scrap heap of history. Nonetheless, there are three positives that I believe will flow from yesterday’s landmark Supreme Court decision …

Passions run deep. Quiner’s Diner gives you some juicy quotes from respected commentators on the scene. The most interesting was actually made 83 years by an Englishman named G.K. Chesterton. It is immediately relevant to today’s drama …

Obamacare stands. In a narrow 5-4 decision, the Supreme Court upheld the key “mandate” provision. The mandate is the funding engine of this sprawling piece of legislation. The public was never presented with a faithful account of what was in this bill. Rather, it was sold with smoke and mirrors. It was based on a con …

The 4th President of the United States, James Madison, visits with Tom Quiner about the Supreme Court’s recent shocking decision.

By Tom Quiner Judge Vaughn Walker says no.  He’s the judge in California who struck down Proposition 8 which defines marriage as the union of one man and one woman. The openly gay jurist said; “A private moral view that same-sex couples are inferior to opposite-sex couples is not a proper basis for legislation.” It’s…