You need to get to know Pete Singer. Fast. 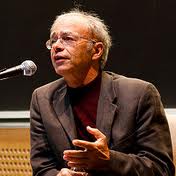 Mr. Singer is an Australian philosopher with associations with Princeton University in the U.S. and the University of Melbourne in Australia.

Mr. Singer is an atheist with a unique philosophy: human life is no more valuable than mosquitos, muskrats, or mackerel, or, for that matter, any other life form on Mother Earth.

There is nothing special about man. Since there is no God, in his view, man was certainly not made in the image of any  deity.

Here is why you need to keep Mr. Singer and his acolytes on your radar. He believes that …

“being a member of the human species does not confer a right to life.”

You only have moral worth in his eyes if you possess certain properties, such as self-awareness, an understanding of desires, the ability to envision the future, and the capacity to feel pain.

Not Pete Singer. He believes she has no human rights for the first several years of her life until she begins to develop the characteristics above. Until then, her parents should be allowed to kill her with impunity.

Mr. Singer maintains that “being human in the biological sense is of no intrinsic human significance.” We are disposable at the whim of the powerful. Mr. Singer is clear in expressing his philosophy:

“Killing a newborn baby is never equivalent to killing a person, that is, a being who wants to go on living.”

Why waste time talking about Pete Singer? After all, most folks consider his view to be nutty. Right? Don’t be paranoid, let’s focus on the real issues of the day like jobs, healthcare, and reproductive rights.

Wrong. Nutty views today can become mainstream tomorrow. I proved that with yesterday’s post (“The evolution of principle.”)

Today’s kooky idea can become tomorrow’s mainstream idea in the hands of the powerful who can profit by rejecting their principles, as the Democratic Party has.

Today, Democrats believe human life is not only disposable, but should be treated as a disease and prevented, at taxpayer expense, no less. Freedom of religion be damned.

Can you imagine sitting across from Harry Truman back in 1948 and saying, “President Truman, I believe we should not only legalize abortion, we should make taxpayers pay for it. Even more, it is imperative that we impose it on religious organizations, especially Catholic ones.”

What would have been Mr. Truman’s reaction? He would have thrown you out of his office. He might have even had you committed, since you were certainly talking like a nutcase.

When a political party has no principles, anything is possible.

The Pete Singers of the world can have tremendous influence on people with no moral bearing. The Obama Mandate is the biggest issue of our time. If the president and his party pull this off, anything goes.

The Obama Mandate is simply a prelude to nihilism where life is without objective meaning, purpose, or intrinsic value.

Peter Singer needs to be stopped.

The Obama Mandate needs to be stopped.