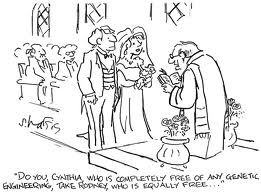 I care about the environment.

I consume in moderation.

I listen to the legitimate concerns expressed by environmentalists, weigh the science behind the politics against the realities of life, and tend to steer a moderate path on such issues.

In other words, I do not discount environmental concerns out of hand. But it is getting harder to do this in light of the sheer inanity of some of the prescriptions proposed by environmentalists.

Environmentalism has moved beyond science and is becoming a cult-like religion.

I’m reacting to an article in a peer-reviewed journal called Ethics, Policy, and Environment. New York University’s S. Matthew Liao is part of the global warming denomination of the environmental cult. He and two colleagues propose not just social engineering, but HUMAN engineering to mitigate the purported global warming threat to mankind.

What do they advocate? They want to develop a pill that makes people vomit when they eat meat so they won’t want to eat it anymore.

They advocate hormonal intervention and embryo selection to “breed” small-sized people, because they consume less.

They want drugs developed that induce empathy and altruism in the next generation because “higher empathy levels correlate with stronger environmental behaviors.”

They want a fixed allotment of greenhouse gas emissions by family to decrease family size. Mr. Liao suggests that these changes should be voluntary:

“As we envisage it, human engineering would be a voluntary activity — possibly supported by incentives such as tax breaks or sponsored health care — rather than a coerced, mandatory activity.”

I did not make this up. Honest.

This is the way the environmental cult thinks. Of course, his prescription is coercive, because you are penalized if you do not comply.

What concerns me is that it is only a matter of time before this kind of nutty thinking gains traction with Democrats.

You have been warned.

Posted in Politics and tagged human engineering, The environment