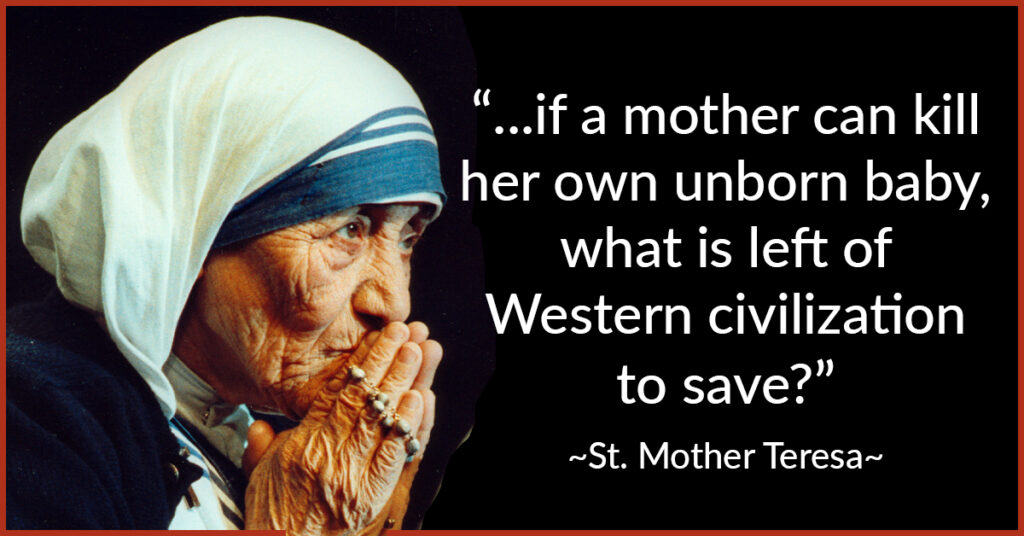 Saint Mother Teresa posed a provocative question: “… if a mother can kill her own unborn baby, what is left of Western civilization to save?”

There’s no question that Western civilization is under attack.

‘Western Civ’ is a decreasingly required course in institutions of higher learning. And when it is taught, curriculum tends to focus on its negatives rather than its staggering achievements.

The progressive Left calls for a dismantling of the structures and values of Western civilization.

Rank and file citizens of the West display increasing apathy towards the rich heritage bestowed upon them by the superior values of Western Civilization.

So before answering St. Mother Teresa’s challenging question, we should ask, “what defines Western civilization?”

The values of Western civilization are superior values

The values of the West are superior to those of any civilization in recorded history. Although many Americans are increasingly indifferent, and even hostile, to these values, this is the place to which refugees flee, as immigration data reveals. Seven of the top ten nations on the list are the fruit of Western civilization.

The U.S. has more immigrants than the next four nations combined. Interestingly, the country most hostile to Western values, China, is dead last on the list.

So what are the values immigrants find so attractive here that they can’t find in their home country?

The United States’ Declaration of Independence provides a concise summary of these values: a belief in immutable (God-given) rights of Life, liberty, and the pursuit of happiness.

From these flow more specific ideas:

• separation of church and state
• freedom of speech
• freedom of worship and religion
• rule of law
• rationalism
• self-criticism
• a disinterested, unbiased search for truth
• equality before the law
• conscience protections
• an embrace of human rights
• economic liberty
• civil liberty

The seeds of liberty were present from the earliest days of Western civilization as goals towards which to strive, even if unrealized at the time. But thanks to Western civilizations’ capacity for self-criticism, evils such as slavery were eradicated, even though the cost was great.

The tangible benefits of Western civilization are obvious: Lower rates of poverty. Higher rates of education and economic prosperity. Better health. No doubt, many immigrants come to America for these reasons.

But the intangible benefits are even better: the opportunity to become all you can to be, thanks to the liberty afforded each citizen.

This leads us back to St. Mother Teresa’s quote above. Abortion destroys the underpinnings of Western civilization. It takes away the right to life and the God-given liberty entitled each person. By eradicating a person’s life and liberty, the pursuit of happiness is meaningless.

So what is left of Western civilization to save?

We’ve eroded our inheritance due to abortion. But the riches and beauty of Western civilization are worth fighting for. The spiritual fruits are evident in the creations of masters such as Mozart, Michelangelo, and Rembrandt. Such breathtaking beauty, which is surely a reflection of the divine, reminds us of what we can become again.

If you like reading my posts on Quiner’s Diner, consider subscribing to the blog at Pulse Life Advocates.