The “King of Pork” is dead. 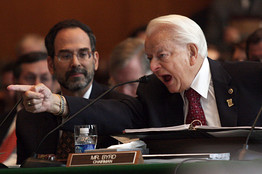 Senator Robert Bird of West Virginia died today.  I will leave it to others to honor (or pillage) his illustrious career.  I would, though, like to analyze the essence of Obamanomics in light of Mr. Byrd’s passing.

So does federal stimulus spending really stimulate the economy?

No.  Read my post from June 21st (Is more big government really the answer?) for a discussion of federal spending as it applied to the Great Depression.

A new study by three economists from the Harvard Business School sheds new light on the impact of federal pork barrel spending on local economies.  Professors Lauren Cohen, Joshua Coval, and Christopher Malloy were stunned to discover that pork spending hurt more than it helped.

• When a Senator becomes chair of one the top three congressional committees, his/her state experiences a 40 to 50 percent increase in pork spending.  The average is about 20 percent in the House.

How could pork-barrel spending hurt instead of help?  The researchers theorize that the federal stimulus dollars crowd out spending the private sector planned to do itself.  The Tennessee Valley Authority of 1933 is one example.  Federal spending creates uncertainty, too, because the dollars may not be there tomorrow if their powerful Senator retires … or dies.

You can read the entire study here: “Do Powerful Politicians Cause Corporate Downsizing?”

The essence of Obamanomics is that government spending creates jobs.  They may create government union jobs, but it comes at the expense of the private sector jobs and economic growth.  New research from Harvard rejects the underpinnings of Obamanomics.

The joke goes that “economics is common sense made difficult.”  With Obamanomics, the joke comes at our expense.

My condolences to Senator Byrd’s family on his passing.