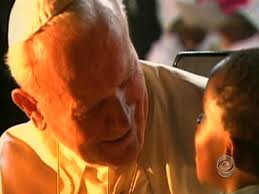 “Have you ever heard of Pope John Paul II?”

This was the question I asked of a small gathering of college-aged students last week. I was giving a presentation on my musical, The Pope of the People, the John Paul II musical.

None of the students had ever heard of JPII.

Keep in mind, he only died seven years ago.

Keep in mind that he was the equivalent of a ruler of a sovereign country whose “citizens” would make it the largest country in the world (the Catholic Church).

Keep in mind that he was a man of historic importance who shaped the history of the world in the last decades of the twentieth century, most notably in his involvement in the fall of communism. He wasn’t just the Pope of the Catholic Church, he was a citizen of the world and visited 117 nations during his papacy.

He was considered the Pope of the People. Even non-Catholics looked to him as a moral leader.

In this era of politically-correct curriculum dictated by the teacher’s union, are they leaving out reference to the man of the century?

Is the mistaken notion of “separation of church and state” simply an excuse to delete an historic figure from the history books because he is also a religious figure?

Perhaps I am mistaken. I would like to hear from teachers and students and tell me that I am wrong.

Tell me that the late John Paul the Great is a part of our schools’ curriculum.

His omission would would be a blow to the cultural literacy of our nation, even if you’re not a Catholic.