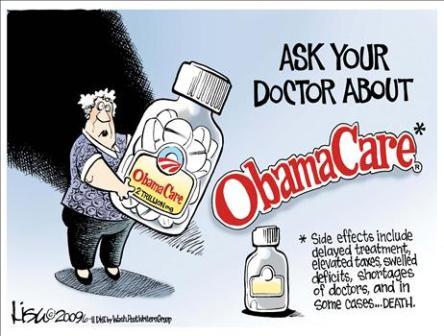 As Team Obama argues for a final rejection of the enumerated powers of the Constitution by upholding Obamacare’s expansion of the federal government, a few justices are saying “not so fast.”

Justice Anthony Kennedy is skeptical and said the government has a “very heavy burden of justification.” This comment seems particularly relevant since Justice Kennedy is considered to be the swing vote.

Chief Justice Roberts expressed concern that the law gives the feds virtually unlimited power. He wondered, then, if they could require people to buy a cell phone:

“Well, the same, it seems to me, would be true say for the market in emergency

services: police, fire, ambulance, roadside assistance, whatever. You don’t know when you’re going to need it; you’re not sure that you will. But the same is true for health care. You don’t know if you’re going to need a heart transplant or if you ever will. So there is a market there. To — in some extent, we all participate in it. So can the government require you to buy a cell phone because that would facilitate responding when you need emergency services? You can just dial 911 no matter where you are?”

Who knows whether the Obama Mandate will hold up or not?

Here’s the lesson to the Republicans. Liberalism abhors a vacuum. In the face of a legitimate issue, Democrat’s instincts call for a big government solution. They will step in and push, and push, and push until they have usurped our freedoms in their heavy-handed approach to public policy issues.

Republicans sat on the sidelines when people were scared about losing their healthcare.

Employees were afraid of losing affordable coverage if they switched jobs.

If, and this is still a big IF, a portion of Obamacare is struck down, Republicans must be quick to intelligently present the free market alternative to the 2700 page Rube Goldberg piece of legislation now called Obamacare.

Republicans need to make the case for interstate commerce when it comes to shopping for health insurance products.

They need to put consumers back in control of purchasing their own products instead of their employers with new tax treatment of consumer-purchased products.

They need to embrace the Paul Ryan approach of defined-contribution Medicare coverage rather than the defined-benefit approach that is bankrupting the nation. And they need to talk to us like adults, with intelligence and logic and less emotion and bombast.

Democrats will demagogue this issue like we’ve never seen before. Republicans need to be the adults in the room when making their case.

The stakes are too high.

They need to lay out their vision on how to protect folks from having their insurance cancelled by greedy health insurance companies when they get sick.

Greedy is a liberal word. But that’s how the nation views insurance companies, and it is with some justification.

So Republicans, now is the time to present a united front with solutions to the legitimate healthcare and health insurance concerns facing America.

If you don’t, you’re paving the way for the social democratic solutions of Europe that Team Obama reveres.