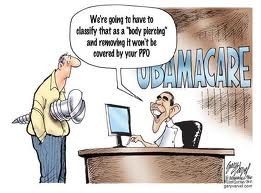 The Obamacare Mandate appears to be in trouble.

No one can predict how the Supreme will vote. But the nature of the Justice’s questioning reveals grave reservations with the mandate.

The Court could uphold the mandate and Obamacare just as it is.

The Court can strike down the entire Obamacare piece of legislation, all 2700 pages of it.

Or they can strike down the mandate only, while retaining the rest of the legislation.

It is this last possibility that is troubling. The mandate is the funding mechanism for Obamacare. If Mr. Obama is re-elected, which is more than a reasonable possibility, and if the Democrats retain control of the Senate or retake the House, we could be stuck with a worse situation: Obamacare would not be able to be repealed.

Insurance premiums would skyrocket as if we were living in a second-rate banana republic with hyper inflation. How could they do anything else? Obamacare requires insurance companies to insure people with pre-existing conditions. It requires them to keep kids on their folks insurance until they are 26.

Both of these requirements raise premiums.

Democrat’s goal has always been to get rid of the insurance companies and go to a single-payer system. As insurance premiums spiral out of control due to Obamacare, do you think liberals will say, “Woops, we we wrong”?

Not a chance. Instead, they will say, “See, we told you we need a complete government takeover.”

I hope the mandate is overturned, but it is fraught with peril.