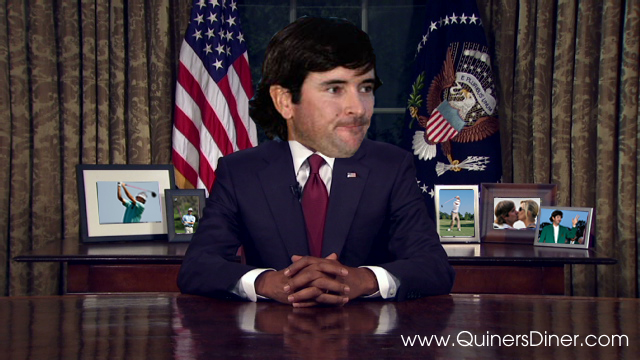 Bubba Watson turned the world of golf upside down yesterday with his stunning, come-from-behind victory in the Masters Golf Tournament.

It got me thinking. Should Republicans consider drafting him as their nominee? I know what you’re saying. He’s only thirty-three, he’s not old enough to be president, according to the Constitution.

On the other hand, he’s got an authentic U.S. birth certificate. That counts for something, doesn’t it!

And besides, the Constitution is overrated according to Barack Obama. So the Dems really should cut Bubba and the Republicans a little slack on this one, don’t you think?

Now why in the world would Republicans want to draft Bubba over Mitt Romney?

For starters, Bubba has won the Masters and Mitt hasn’t. And he was cool and calm under pressure.

Mitt could take a lesson.

And yet when he won, Bubba displayed real, honest-to-goodness emotion. Nothing phony about that guy.

Then there’s Georgia, the site of the Masters. Add in another 16 votes. They’re not about to give their state to Obama with that slice of his.

What about California, the liberal’s playground? Interestingly, they have 906 golf courses, more than any other state, except Florida. There’s no question, they’ll vote Bubba over Barack in a heartbeat.

There’s no doubt that a guy who can pound a drive 350 yards with a pink driver is going to win California’s 55 electoral votes over a guy who’s lucky to hit it 200 yards with a tail wind.

Without California, Obama’s candidacy is doomed.

And then there’s Michigan and its 16 electoral votes. Bubba might want to add Mitt to his ticket to ensure he wins the state. But the truth is, he may not even need him. After all, Michigan has the third most golf courses, behind Florida and California.

Here’s where things get interesting. Both Mssrs. Bubba and Barack are Lefties. That certainly makes Republicans squeamish.

But after seeing the way Bubba can hook the ball to the right, I think every conservative in America will surely breathe a sigh of relief and put an “x” by Bubba Watson’s name for President.

On the other hand, Barack’s drives veer to the Left. He just can’t help it. It’s in his blood.

Republicans believe in a big tent, as Ronald Reagan used to say.

Did you see the driver he uses to pound the ball 350 yards down the fairway?

It’s pink. A deft touch to capture the gay vote.

Pro lifers will like that. Adoption is the answer to abortion.

The stars are in alignment. This is the dawning of the age of Bubba!