That is the single thought that unites conservatives and liberals with the Pope’s visit to the America.

Liberals want Francis to put conservatives in their place for (supposedly) disdaining the immigrant and Mother Earth. 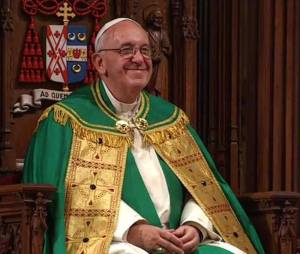 Conservatives want Francis to put liberals in their place for disdaining the pre born and traditional marriage.

In his video commentary above, the great Fr. John Riccardo gives his take on what Pope Francis is really trying to do. Fr. Riccardo is a particularly gifted Catholic speaker and lecturer. He is heard on Catholic radio stations throughout the country.

According to Riccardo, Francis is trying to get people acquainted (or in many cases, reacquainted) with Jesus. He wants them to experience the love of God. He doesn’t lead with doctrine, because rules and regulations don’t resonate with the person who has no relationship with Christ.

What he doesn’t do is ‘stick it to them.’

As a conservative, I think the Pope’s approach is slanted towards liberal issues. But Riccardo uses a compelling metaphor when explaining the Francis style: you can’t bend cold steel. You have to warm it up before it becomes pliable.

No one is going to embrace the faith because of its rules. It is love that moves us, because God IS love.

A religion like Islam suggests that God can be loving, that He possesses that character trait, but Christianity goes way farther.

Doctrine becomes meaningful as the heart warms to the beauty of Christ. The most potent form of love is agape’, or sacrificial love. Pope Francis wants the world to make sacrifices on behalf of the neediest among us.

We wish Francis would let liberals in Congress “have it.” But he didn’t.

The Pope wants our hearts to melt through the unimaginable beauty and tenderness of Christ’s love.

A hard heart is less pliable than cold steel. A heart burning with the fire of the Spirit can’t be stopped.