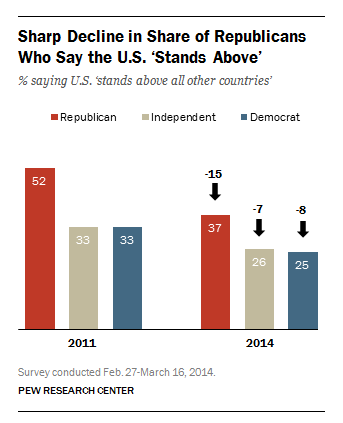 I proudly flew my American flag over the Memorial Day weekend.

As I drove around town, I’d occasionally see a flag waving from a bungalow here, a ranch house there, or a mansion over yonder.

When I see a flag, I usually make a crack to my wife that “a Republican must live there.”

I assume that Republicans are more patriotic and more likely to display a flag than Democrats, especially in this age of the Obama Government which downplays patriotism. Mr. Obama dreams of world governance by elites who know what the ‘little people’ need.

He disparages the notion of ‘American exceptionalism’.  A few years ago, he said,

In other words, everyone thinks their own country is great. Actually, that’s not quite the case, according to the Pew Research Center.

For example, 71% of Americans are very proud to live in America. But for the French, it’s only thirty-eight percent.

For the Germans, and the Japanese, it’s only twenty-one percent.

Did you know that three out four Americans would like to see our views spread throughout the world, but only one out of three Brits feel the same about their country?

President Obama either underestimates Americans or overestimates Europe when he talks about exceptionalism.

This leads me back to my earlier hypothesis that Republicans are more likely to display a flag than Democrats. According to another Pew survey, I’m right. 73% of Republicans say they fly the flag compare to just 55% of Democrats.

After 7 years of Obama rule, American’s belief in America has taken a shocking hit. Pew surveyed Americans in 2011 and asked if they think ‘America stands above other nations.’ In 2011, 52% of Republicans said yes compared to just 33% of Democrats, as you can see in the graph above.

Barack Obama had a singular goal of fundamentally transforming America. He has succeeded beyond his wildest expectations, as Pew has revealed in these poll numbers.

Not only do fewer Americans believe in America, they are angry. According to a CNN/ORC poll earlier this year, 69% of Americans are “angry” at the way things are going in this country.

This is the Obama legacy.