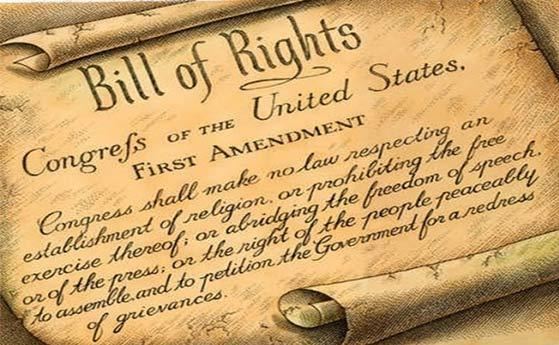 The Left has hijacked the Democratic Party. You see it in Democrats’ growing hostility towards the Bill of Rights.

“We need to fix our dysfunctional political system and get unaccountable money out of it once and for all, even if that takes a constitutional amendment.”

But limiting money that can be spent promoting your political view is the essence of free speech suppression, the Supreme Court has ruled. Thus the need for a constitutional amendment if Democrats are to have their way. A few years ago, 54 Democratic senators voted for such an amendment.

A YouGov poll found a majority of Democrats call for government controlled limits on what they consider “hate speech,” which to reiterate, is largely speech with which they disagree. Only 26% of Democrats opposed any limits on free speech.

Religious liberty, such a bedrock of the American Dream, has long been dismissed by Democrats. They cheered when President Obama imposed the HHS mandate on Americans, forcing people of faith, such as the Little Sisters of the Poor, to violate their religious consciences, or be fined out of existence.

The Democratic Party of today embraces the same view on religion as the old Soviet Union: you are free to worship in your home, but keep it out of the public square. Just ask any florist or baker who gently decline to take on a same-sex wedding.

The most-loathed Amendment for Democrats these days has to be the Second Amendment. Democrats are playing a game with the American public. They say they merely want “common sense” gun regulations. But a Quinnipiac Poll shows that a third of all Democrats want the entire Amendment repealed. Eighty-two percent of Democrats call for an outright ban on semi-automatic firearms. As Democratic Congressman, Mike Doyle (PA), puts it:

“The Second Amendment needs some changing, because Americans don’t agree with it and we’ve had it.”

His fellow comrade in the House, Keith Ellison (MN), echoes his sentiments:

“I sure wish they would.”

To clarify, a third of all Democrats support it, NOT all Americans. I hope Democrats have the honesty to promote such a radical proposal, because it is the political kiss of death.

Democrats loathe a couple of other Amendments that comprise the Bill of Rights, but these aren’t trotted out as aggressively as the ones already mentioned.

Take the Fifth Amendment. Do you remember what Nancy Pelosi and House Democrats did a little less than two years ago? They conducted a “sit-in” in House Chambers demanding that anyone on the “no fly list” be denied the right to buy a gun, a blatant denial of due process. Even the ultra liberal ACLU said that was going to far.

It’s not easy to tack left of the ACLU, but that’s how far afield the Democratic Party has gotten from the party they used to be. Due process has become a political weapon.

We can’t conclude the conversation without referring to the most loathsome of all Amendments when it comes to modern day Obamacrats: the Tenth. This beautiful Amendment was supposed to limit the power of the federal government to those rights delegated to it by the states.

Franklin Roosevelt walked all over the Amendment, and Barack Obama finished the job by stomping on it.