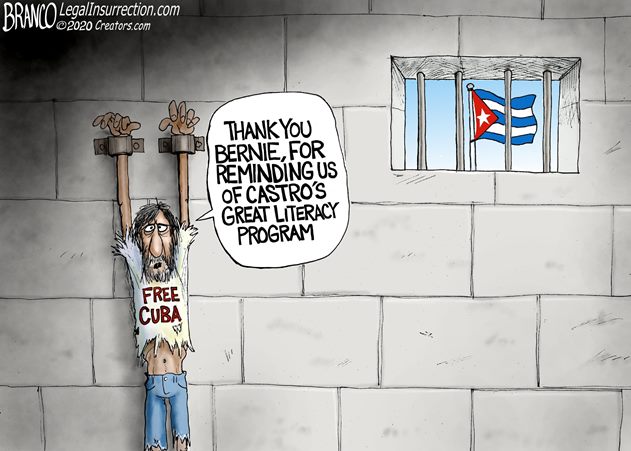 These were the last words Howard F. Anderson ever heard. He was executed by firing squad per the orders of Fidel Castro. He refused a blindfold so he could bravely stare down his executioners. He whistled a tune before the first bullet pierced his heart, ending his life.

Prior to his execution, Castro had most of Mr. Anderson’s blood drained so it could be put to medical use for the benefit of his revolutionary soldiers.

Howard F. Anderson was one of some 20,000 Cubans tortured and executed by Fidel Castro. Although he wasn’t in the same league with Hitler, Stalin, or Hussein, Castro was nonetheless a prolific mass murderer of his political enemies.

For some reason, American progressives, such as Bernie Sanders, go out of their way to say nice things about Castro:

“When Fidel Castro came to office, you know what he did? He had a massive literacy program. Is that a bad thing? Even though Fidel Castro did it?”

MSNBC’s Andrea Mitchel concurred, and went one better by including health care:

NBC reporter, Ed Rabel, was granted access to Cuba back in 1988. He waxed eloquent about the “Cuban paradise”:

“There is, in Cuba, government intrusion into everyone’s life, from the moment he is born until the day he dies. The reasoning is that the government wants to better the lives of its citizens and keep them from exploiting or hurting one another….On a sunny day in a park in the old city of Havana it is difficult to see anything that is sinister.”

One reporter did see something sinister. Her name is Bonnie M. Anderson, a former reporter for CNN, a 7 time Emmy Award winner, and a Pulitzer Prize finalist. Ms. Anderson was stunned by CBS News’ coverage of Castro’s illness when he was dying. They repeatedly stated that:

”Castro is considered a ruthless dictator by some in Miami.”

The key word is “some.” CBS implied that there isn’t a consensus on whether Castro is a ruthless guy or not.

So why was Ms. Anderson so worked up? Because her Dad was Howard Anderson to whom I referred at the top of this post. She and her mother were able to flee to Florida to escape further persecution. She said almost every family in Cuba in some way had been touched by Castro’s reign of terror in Cuba.

She knows about the torture and the 20,000 deaths.

Ms. Anderson was writing for the Miami Herald back in the late 70s. She wrote something critical of Castro. He got wind of it and was so infuriated that he had her father’s remains dug up and thrown out.

Those are the sort of things Castro didn’t let reporter Ed Rabel see.

The American media slobbers all over the mass-murdering Castro. Here is a small sampling:

“Half of the Cuban population is under the age of 25, mostly Spanish speaking, and all have benefitted from Castro’s Cuba, where their health and their education are priorities.” [Kathleen Sullivan, CBS This Morning]

“Castro has delivered the most to those who had the least, and for much of the Third World, Cuba is actually a model of development. Medical care was once for the privileged few. Today it is available to every Cuban and it is free.” [Peter Jennings, ABC World News Tonight]

“The educational system is a jewel in the society his revolution has built….It’s a source of great pride for the President, as is Cuba’s literacy rate — virtually 100 percent.” [Dan Rather, CBS News]

“If a man who murdered 20,000 people, imprisoned for decades hundreds of thousands of others, caused countless hundreds of thousands to flee the country (many losing their lives in desperate attempts to reach freedom on flimsy rafts) and has repressed a nation for nearly five decades – – denying them the most basic of human rights — is not considered a ruthless dictator by all, who the hell is? … But I have faith in my fellow American citizens. And I know, in my heart and spirit, that when the truth is known, those of us who have suffered at the hands of Fidel Castro will finally receive the compassion we are due.”

Did things get better after the Cuban thaw implemented by Barack Obama in 2014? Not according to Human Rights Watch:

“The Cuban government continues to repress dissent and discourage public criticism. While in recent years it has relied less on long-term prison sentences to punish its critics, short-term arbitrary arrests of human rights defenders, independent journalists and other critics have increased dramatically. Other repressive tactics employed by the government include beatings, public acts of shaming and the termination of employment.”

What do liberals consider to be evil?

But in their moral confusion, they think Fidel Castro and communist Cuba has a pretty good track record.