For my non-Catholic readers, the message of the Catholic Church is clear, consistent, and 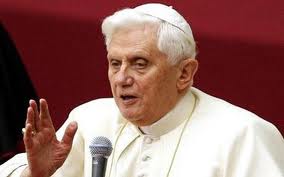 The Church doesn’t bend to the whims of the culture.

It doesn’t stick its finger in the air to see which way the wind is blowing.

Rather, the Church leads on the critical social issues of the day.

This embrace of absolute Truth infuriates the Left and their lapdogs in the Democratic Party, because Catholics have been a loyal constituency of what used to be known as the party of the little guy.

That is changing this election cycle as Team Obama has thrown the Catholic Church under the bus and abandons the little guys in the womb.

Pope Benedict XVI is clear on where the Church stands, which I will present in a Q & A format:

QUINER’S DINER: Your Holiness, gay marriage is quickly being embraced by the Democratic Party as a civil rights issue. Is there anything wrong with same sex attractions?

THE POPE: “Although the particular inclination of the homosexual person is not a sin, it is more or less a strong tendency ordered to an intrinsic moral evil, and thus the inclination itself must be seen as an objective disorder.”

QUINER’S DINER: How do you respond to Catholics who embrace same sex unions as a social justice issue?

THE POPE: “An Adult faith does not follow the waves of fashion and the latest novelties.

We must have great respect for these people who also suffer and who want to find their own way of correct living. On the other hand, to create a legal form of a kind of homosexual marriage, in reality, does not help these people.”

QUINER’S DINER: Using an American political term, what’s your “spin” on what is happening in the U.S. on this issue?

THE POPE: “Having a clear faith, based on the creed of the church is often labeled today as fundamentalism. Whereas relativism, which is letting oneself be tossed and swept along by every wind of teaching, looks like the only attitude acceptable to today’s standards.”

QUINER’S DINER: The shifting sands of moral relativism is the dubious foundation of the Democratic Party. They at one point opposed abortion. Now they will go to the mat for it. They have convinced much of the Catholic laity in this country that it is but one issue of many that Catholic voters must weigh. Are the Democrats right? Does abortion carry the same moral weight as other issues?

Catholic politicians of the Democratic Party consistently oppose their Church in the public arena on these critical social issues to the Catholic Church.

Think about this for a minute.

Yesterday, the Democratic Party believed one way on these issues.

Today, they believe another.

Yesterday, the Catholic Church believed one way on these issues.

In light of the fickle positions of the Democrats, who is the more persuasive arbiter of the Truth? The Democratic Party or the Catholic Church?