That’s what the Democratic Party is telling us Christians. They’re leaving no wiggle room.

If you believe the Bible’s assertion that each person is made in God’s image, that our Creator knew us before we were born, and that human life is so sacred that the Son of God went to a hideous, grotesque death on our behalf, then you have no place in the Democratic Party.

Either you need to shuck your faith and embrace their Leftist religion, or get out. Party chair Tom Perez made that abundantly clear with this recent comment: 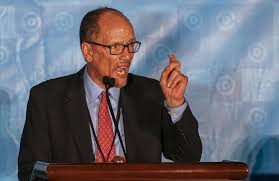 “Every Democrat, like every American, should support a woman’s right to make her own choices about her body and her health. THAT IS NOT NEGOTIABLE and should not change city by city or state by state. At a time when women’s rights are under assault from the White House, the Republican Congress, and in states across the country we must speak up for this principle as loudly as ever and with one voice.”

Anyone holding Christian beliefs is unacceptable to the Left, as Senator Sanders unequivocally stated at the confirmation hearing for Russell Vought, President Trump’s nominee to be Deputy Director of the White House Office of Management and Budget:

“I would simply say, Mr. Chairman, that this nominee is really not someone who this country is supposed to be about.”

Mr. Vought is a Christian. Senator Sanders chose to question the nominee not on his experience, but on his religious beliefs, and the questions were aggressive:

SANDERS: Do you believe people in the Muslim religion stand

condemned? Is that your view?

VOUGHT: Again, Senator, I’m a Christian, and I wrote that piece in accordance with the statement of faith at Wheaton College…

SANDERS (interrupting): …I understand that. I don’t know how many Muslims there are in America. Maybe a couple million. Are you suggesting that all those people stand condemned? What about Jews? Do they stand condemned too?

SANDERS: You think your statement that you put into that publication, they do not know God because they rejected Jesus Christ, His Son, and they stand condemned, do you think that’s respectful of other religions?

Think about this: Mr. Sanders and most of his party don’t believe Christianity is true. They don’t think Islam is true either. So why do they badger Christians and not Muslims?

We’re witnessing an incredible exodus from Christianity by the Democratic Party. Their hostility to the Christian God was on display at one of their conventions a few years ago when delegates booed the inclusion of ‘God’ in their platform.

Out in Oregon, every Democrat but one voted for a bill which allows the starving and dehydrating to death of patients with dementia and mental illness, which directly contradicts Christ’s teachings in Matthew 25:34-40:

34“Then the King will say to those on His right, ‘Come, you who are blessed of My Father, inherit the kingdom prepared for you from the foundation of the world. 35‘For I was hungry, and you gave Me something to eat; I was thirsty, and you gave Me something to drink; I was a stranger, and you invited Me in; 36naked, and you clothed Me; I was sick, and you visited Me; I was in prison, and you came to Me.’ 37“Then the righteous will answer Him, ‘Lord, when did we see You hungry, and feed You, or thirsty, and give You something to drink? 38‘And when did we see You a stranger, and invite You in, or naked, and clothe You? 39‘When did we see You sick, or in prison, and come to You?’ 40“The King will answer and say to them, ‘Truly I say to you, to the extent that you did it to one of these brothers of Mine, even the least of them, you did it to Me.’

His warning that follows should chill every Democrat to the bone who voted for this abomination:

Jesus: “I carried this cross for each of you.”

41“Then He will also say to those on His left, ‘Depart from Me, accursed ones, into the eternal fire which has been prepared for the devil and his angels; 42for I was hungry, and you gave Me nothing to eat; I was thirsty, and you gave Me nothing to drink; 43I was a stranger, and you did not invite Me in; naked, and you did not clothe Me; sick, and in prison, and you did not visit Me.’ 44“Then they themselves also will answer, ‘Lord, when did we see You hungry, or thirsty, or a stranger, or naked, or sick, or in prison, and did not take care of You?’ 45“Then He will answer them, ‘Truly I say to you, to the extent that you did not do it to one of the least of these, you did not do it to Me.’ 46“These will go away into eternal punishment, but the righteous into eternal life.”

The Democratic Party wants nothing to do with Christians, whose belief system of Life so opposes the politics of death that so defines what it means to be a Democrat.

Christians are no longer welcome in the Democratic Party.