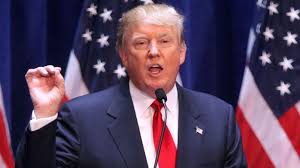 Trump needs to hit the stump and sell “repeal and replace”

Barack Obama was a good salesman for the Affordable Care Act.

He gave speech after speech, lying through his teeth at every turn. Nonetheless, Democrats were able to eek the bill through Congress without a single Republican vote … and despite the bill’s unpopularity with a majority of the country.

The bill has remained unpopular. Republicans vowed to repeal and replace it, and their efforts are floundering.

Where is President Trump in the process? Other than cajoling Republicans to get something, anything, passed, he is absent from doing what he does best: selling the plan.

The country opposes the Republican plan, because they largely don’t know what’s in it.

If anything, President Trump hurts the cause with one drama after another. In the last week alone, he attacked his Attorney General, hired a new communications director which led to the resignation of his Press Secretary, deflected Russian collusion allegations directed towards his son and son-in-law, and shook up his legal team that is handling the myriad collusion dramas swirling around all things Trump.

What’s missing is a concerted sales pitch to sell the proposed repeal and replacement of Obamacare, which is imploding. If something isn’t done, a lot of people are going to get hurt.

I propose he tour the country and give a speech, something like this, every day until the bill passes:

“My fellow Americans, as you know Obamacare is imploding. Insurance companies are pulling out of the exchanges and rates are exploding. Because of the way the Obamacare plan was structured, the national debt is also exploding.

If the quality of healthcare was improving, and if life expectancies were still increasing, the glaring deficiencies of Obamacare would be more tolerable. But they are not.

Your fellow Americans on Medicaid receive shoddier and shoddier care at the same time that life expectancies have dropped.

The status quo is simply unsustainable, and the clock is ticking.

Republicans acknowledge the worthy goals of Obamacare which were: to provide the uninsured with access to affordable health insurance.

These are great goals, but sadly Obamacare couldn’t pull it off. Just the opposite. Rates spiked. Millions remain without health insurance. And availability of any type of coverage is fast dwindling for many.

Obamacare used a top down approach laden with heavy bureaucracy and lots and lots of penalties and taxes.

In all, the Affordable Care Act was wildly unaffordable because it mandated essential coverage in every policy even if YOU didn’t think some of these benefits were essential, and even if you couldn’t afford these benefits.

There has to be a better way, and there is.

Republicans join Democrats in the goal of seeking a way to provide the uninsured with affordable healthcare insurance. But we believe in a bottom-up approach which empowers the individual, not Big Government or Big Insurance Companies.

For starters, the individual mandate is eliminated. Gone! You won’t be fined $2085, like you would’ve been under Obamacare if you didn’t purchase coverage.

Companies with 50 or more employees will no longer face taxes and penalties if they do not provide health insurance to their employees. This feature of Obamacare was a real job-killer. Getting rid of it will help create more, good paying jobs while getting people off of Medicaid.

As a result, the amount of money states receive per Medicaid enrollee will be capped. Other Medicaid payments will be tightened up. Obamacare expanded Medicaid coverage to able-bodied men and women without any sort of work requirement. Frankly, we can’t afford it. And it’s not fair to taxpayers already stuck with high insurance premiums and high taxes to pay for Medicaid for others without a work requirement.

Insurance companies must still offer insurance if you have pre-existing conditions. However, if your previous coverage elapsed 63 days or more in the previous twelve months, insurers can charge you 30% more, creating an incentive to maintain coverage, while discouraging gaming the system, a great way to moderate premiums.

Insurers will be allowed to charge higher premiums to older customers, who statistically consume more healthcare services. However, this will be offset by tax credits which increase with age. This is significant since a tax credit reduces tax exposure on a dollar for dollar basis.

And to honor my pro life commitment, tax credits can’t be used to pay for insurance coverage that includes human abortion services, except for limited exceptions.

Obamacare subsidies are eliminated. However, they will be offset by a $100 billion Patient and State Stability Fund over the next nine years, which will be block-granted to states for them to deploy in a way that best fits their residents. This effectively builds on an approach that was in place in a majority of states prior to the passage of Obamacare.

Tax-exempt health savings accounts will be increased from $3,400 for individuals and $6,750 for families now to $6,550 and $13,100. Their use is broadened to include more over-the-counter pharmaceuticals limited by Obamacare.

And finally, young adults under 26 can remain on their parents’ plans.

This bottom-up approach puts you back in control of your own health insurance and gets Big Government off of your back.”

The info above was based on the House Republican’s plan. Things will change should Republican Senators ever pass their own bill. But they need help. They need the president to help sell it.

President Trump needs to cut back on the chaos, and take the lead in restoring health insurance sanity to our country.

Time to hit the stump, Mr. President, and sell the benefits of the Republican plan!