The NFL Players Association imposed dramatic new workplace rules in the NFL thanks to the acquiescence of the new NFL commissioner, Barack Obama… More…

Yesterday’s Quiner’s Diner ran a letter written by a Florida teacher who resigned due to her frustration with today’s demands on public school students and teachers. She said teaching reforms rob students of a developmentally appropriate education. So what is the alternative? How about home-schooling? Read on to learn about the effectiveness of home-schooling … More…

It doesn’t matter what the subject is, they outperform kids in the public schools, as you can see in the graphic above.

OK, it took some time for me to arrive at this position, but I am now a huge fan of flexible schooling. We did it the last two years of youngest daughter’s high school and wish we would have started earlier. Technically it is home schooling, but with the mix of online courses and Home School Association classes it is really more like flexible schooling… More… 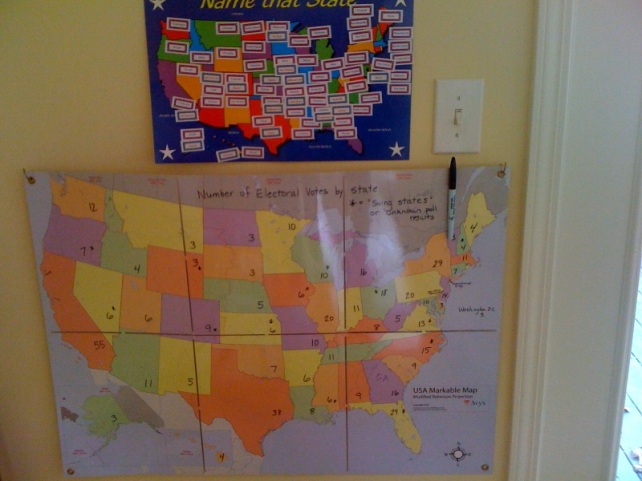 My mom was a teacher. So were my aunt and uncle. So is my daughter-in-law. So is my niece.

I was blessed with many exceptional teachers growing up in the public school system.

Today, I am witnessing amazing passion amongst home schoolers. I received an e-mail today from a home-schooler that prompted this post. She showed me how she is using the election as a great teaching opportunity for her three children, whom she home schools.

Look at the map and chart above she created for her three children, her students. Is there any doubt that the two seven year olds and the 11 year old in the class are going to have a pretty clear understanding on how our electoral system works?

With a three-to-one student to teacher ratio, they receive concentrated instruction with lots of opportunity for interaction to accelerate their learning curve.

I sat behind three sisters at Mass one Sunday. I knew their parents and was acquainted with the girls. I watched how they interacted. It was clear that they really like each other. Their affection was obvious.

I talked with them about being home schooled, and the oldest girl, who is about 16, said, “they were the happiest days of my life!”

The kids I know who are being home schooled are going to be leaders in communities some day.

Home schooling was illegal in thirty states as recently as 1980. It wasn’t until 1993 that it became legal in all fifty states.

Some home school for religious reasons. Increasingly, more are doing it because the learning environment in public schools has declined. How many public school teachers have you heard complain that they wish they had more time for teaching, that they didn’t want to spend so much time on discipline and paperwork?

More parents are pulling their kids out of public schools to avoid violence, peer pressure, and poor academic quality.

A national study from 2007 broke it down this way:

36 percent home school so they can emphasize religious or moral instruction;

21 percent home school out of concern for their child’s learning environment;

17 percent home school out of dissatisfaction with the local academic institutions.

How does the quality of home schooling compare to public schools? Dr. Brian Ray of the National Home Education Research Institute conducted a study of  11,739 homeschooling students and their families from all 50 states through 15 independent testing services.

The report is called the Homeschool Progress Report 2009: Academic Achievement and Demographics. It is the most comprehensive study of home schooling to date. Here is what they found:

“The results support the large existing body of research on homeschool academic achievement and show home schoolers, on average, scoring 37 percentile points above public school students on standardized achievement tests. The study also found that the achievement gaps common to public schools were practically insignificant in the homeschool community.”

A common concern voiced by some parents and educators is that students may lack sufficient socialization in the home school environment. The home schoolers I know overcome that concern by scheduling both classroom and social events with other home schoolers. The kids I know being home schooled are exceptional without exception.

Public schools have become bastions of political correctness, self-esteem mania, and the official religion of the Democratic Party, Secular Humanism. All of this comes at the detriment of our nation as evidenced by declining test scores and ignorance among our youth of American exceptionalism.

The future strength of America will be in direct proportion of the number of parents who decide to home school their children.