Liberal honesty is refreshing, perhaps because it is so rare. 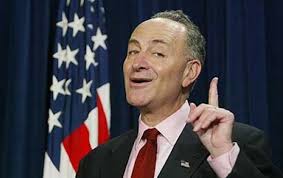 As repulsive as Jonathan Gruber’s statements were on the collective stupidity of Americans and the need to con us into accepting Obamacare, it was refreshing to hear a liberal speaking honestly about their true feelings towards you and me.

Now liberal Democratic Senator Charles Schumer is speaking honestly about Obamacare. Recall that this man was a ferocious defender of the government takeover of healthcare. Even when single moms raising three kids were getting laid off from their jobs thanks to Obamacare, Senator Schumer attempted to make lemonade from lemons with delicious little quotes like this morsel:

“The single mom, who’s raising three kids, has to keep a job because of healthcare, can now spend some time raising those kids. That’s a family value.”

As far as I know, he said this with a straight face.

Seeing the writing on the wall, the good senator is now singing a different tune about Obamacare:

“Democrats should have continued to propose middle class-oriented programs, and built on the partial success of the stimulus. But unfortunately, Democrats blew the opportunity that the American people gave them. We took their mandate and put all of our focus on the wrong problem: Healthcare reform…it wasn’t the change we were hired to make.”

Interestingly, with Mary Landrieu’s upcoming defeat in the Louisiana senatorial run-off vote, 30 of the Democratic senators who voted for Obamacare (that’s half of them) will have left office (translation: been fired).

Let us hope this trend of liberal honesty continues.