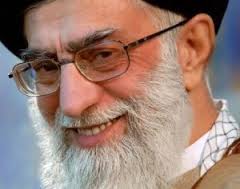 AYATOLLAH KHAMENEI: “Obama is a sucker”

The ayatollah hates us.

He might even hate Israel more, but honorable people may disagree.

I think that’s a fair characterization of the Supreme Leader of the Islamic (so-called) Republic of Iran. Let us review some of Ayatollah Ali Khamenei’s quotes over the years.

[There is only one possible solution to unrest in the Middle East], “namely the annihilation and destruction of the Zionist state.”

Subtle, isn’t he? Not just annihilation. Not just destruction. Both!

“Iran’s stance has always been clear on this ugly phenomenon (Israel). We have repeatedly said that this cancerous tumor of a state should be removed from the region… No one will allow a bunch of thugs, lechers and outcasts from London, America and Moscow to rule over the Palestinians.”

So much for tolerance and inclusion.

“Furthermore, all the Western politicians, intellectuals and journalists are obliged to pay homage and bow to the monument that commemorates those allegedly killed in the Nazi concentration camps. In other words, all should acknowledge the veracity of something that has not been proven! This is also one of the propaganda means being applied by the Zionists to portray themselves as the victims of persecution!”

Rumor has it that the Ayatollah also believes Elvis is still alive living in the basement of a mosque somewhere in Appalachia.

“It is the mission of the Islamic Republic of Iran to erase Israel from the map of the region.”

Sounds like a guy who wants to trip all over himself making concessions, doesn’t it?

“The U.S. officials are now revealing their true nature. In his recent speech, the U.S. president [G.W. Bush] spoke like a person who is thirsty for the blood of human beings! He threatened and leveled baseless accusations against other governments and nations. Considering the existing realities on the ground, most of the nations in the world have now come to the conclusion that the U.S. is really the Great Satan. This belief is also substantiated by concrete evidence.”

Ouch, that hurts! Couldn’t he have just called us insensitive?

“Our people say “Death to America,” and this is like saying “I seek God’s refuge from the accursed Satan,” which is recited before any chapter of the Koran, even before “In the name of Allah the Compassionate, the Merciful.” Why is this? So the believer will never forget, even for a moment, the presence of Satan. So he will never forget, even for a moment, that Satan is ready to attack him and to destroy his spiritual shield and is faith… The saying “Death to America” is for this purpose.”

I’m getting the impression he really doesn’t like us.

“Today, America poses a threat to peace and security in the world. Therefore, the slogan “Death to America” is no longer used only by our people. Today, you see throughout the world people setting fire to the effigy of the American president and chanting the slogan “Death to America.” This is because of the American regime’s exaggerated demands, its arrogance, its vanity, and its desire to control, and because it is a pawn in the hands of the Zionists.”

I think he’s made his point.

“From now on, in any place, if any nation or any group confronts the Zionist regime, we will endorse and we will help. We have no fear expressing this… The Zionist regime is a cancerous tumor that must be removed, and God willing it will be.”

You get the idea.

Our president has just concluded a deal with this bundle of hate. One can’t help but compare him to Neville Chamberlain who fell all over himself to sign a treaty with Hitler back in 1938.

You know how that ended.

There is a big difference between Iran today and Germany yesterday. In 1938, Hitler had not made his true feelings known regarding his “final solution,” which called for the eradication of Jews.

On the other hand, Iran is crystal clear and very loud about their desire to see Israel eradicated, and to have the U.S. brought to its knees.

Iran is responsible for the deaths of more than 1000 Americans in Iraq and Afghanistan. The only thing holding them back from exporting their murderous impulses beyond the mideast to our homeland is money and weapons.

The agreement concluded by “Neville” Obama unfreezes some $150 BILLION in Iranian frozen assets. If you had to make a guess, which of the following three uses for this windfall do you think the Ayatollah will pursue?

Neville Obama is stuffing the Ayatollah’s pocket with cash while giving them a green light to develop their nuclear capabilities. But this tough agreement says they can’t build a bomb for fifteen years.

Consider something: if Mexico were Iran, do you think this would be a good treaty for the United States? Of course not. The American people wouldn’t stand for it, except for the American-haters who dominate the political Left.

So what’s the difference?

Based on the intensity of Iran’s hatred toward America and Israel, an armed and cash-rich Iran is going to hurt a lot of people.

It doesn’t matter if they live next door or across the sea.