Mel Gibson had a dream.

He wanted to make a movie about the crucifixion of Jesus Christ.

In vintage Gibson fashion, it would be gritty, authentic, cinematic. And violent.

Why did he want to make this film? To try to help us understand exactly what Christ did for us. As Fr. John Riccardo once said regarding the crucifixion, “If this is the cure, imagine the disease.”

Mel Gibson wanted us to understand the disease we all carry with us, which is called Original Sin. He wanted to elevate the significance of the Cure through a film that is both beautiful and ugly.

Hollywood didn’t want anything to do with it.

Hollywood fretted that it was too controversial because of the concern that he was blaming Jews for Christ’s execution. (He wasn’t. That was Hollywood’s excuse to nix a film whose values they denigrate.) 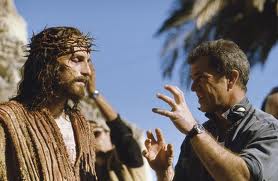 Mel Gibson directs Jim Caviezel in a scene from "The Passion of the Christ."

Gibson funded the film himself. It cost $30 million to produce. The Passion of the Christ generated $611,899,420 in international box office receipts and made Mel Gibson a very rich man.

In light of such dramatic financial success, did Hollywood jump on the bandwagon to begin churning out Christian-themed films that are box office gold?

No. Christianity is the antithesis of the Secular Humanism embraced by the Hollywood elite and the political Left in this country.

Let us fast forward to today.

Hollywood didn’t want to make another movie, because it didn’t represent their values. The name of the film is “October Baby.” It sounds like a gripping story. It follows the life of a woman whose parents wanted to abort her, but eventually gave her up for adoption.

[Quiner’s Diner wrote about a similar situation last year in the post titled “Life is Beautiful.” I encourage you to re-read it.]

“This film couldn’t find a home, no studio wanted to touch it. It was considered too controversial.”

When has Hollywood shied away from controversy? Let’s get serious.

Was Brokeback Mountain too controversial?

Hollywood embraces controversy when it promotes the values in which it believes.

It views abortion as a sacrament, thus their reticence in financing a film that reveals the humanity that blossoms within the womb.

The critics are giving a thumbs down to October Baby. But guess what? The public isn’t.

This anti-abortion film had the second-highest per screen average in its opening last week.

A website that did give October Baby high marks is the Christian-based Movieguide.org. Their founder, Dr. Ted Baehr, said the success of this film is due to the positive Christian based themes it so beautifully presents:

“All who see it should be transformed, so considering the importance of the message, everyone should see it.

“We don’t have the deep pockets and resources that big studios have. So we have to take the long approach. But people are really getting behind this and rallying. People identify with it, that’s why the film worked.”

Director Erwin speaks eloquently about the beauty of life in the video at the bottom of this post. Watch it.

If October Baby hasn’t reached your town yet, call your local movie theater and ask them to screen it. Or  join forces with church communities in your area for your own private screening.

Hollywood’s box office receipts are in a state of decline. Let’s show them how simple it is to reverse the trend. Just starting making films with the Judeo-Christian values that inspire your viewers, like you used to do.