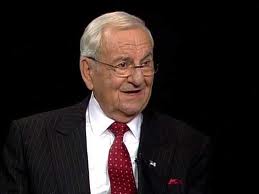 Do you remember Lee Iacocca?

He was the mastermind behind the development of the Mustang for Ford Motor companies back in the 1960s.

The Mustang was a huge hit and made Ford millions.

He was also involved with the engineering of the Ford Pinto, which wasn’t so successful, because of a little problem with their gas tanks exploding.

Ford fired him for that debacle.

Chrysler hired him to turn around their company as they hovered on the brink of bankruptcy. Mr. Iacocca earned a salary of $1 per year until they began to turnaround, which they did.

As the company rebounded with a vengeance, his salary was hiked to something like $15 million per year.

A very good friend of mine, who happens to be very liberal, remarked that “no one is worth that much money.”

I responded, “says who?”

She didn’t have a response other than “says me!”

… which leads me to Peyton Manning.

Peyton Manning was recently released by the Colts because his $90 million contract was considered too rich in light of his recent health problems.

The Denver Broncos quickly picked him up and signed him to a $96 million five year deal.

Is he worth it?

My friend, the liberal, would reiterate her view that “no one” is worth that much money. The Denver Broncos view Manning as their Iacocca. The Colts were an also-ran team when Peyton Manning came on the scene. After a miserable rookie season when the Colts went 3-13, the Manning-led Colts made a dramatic turnaround that made them the team with the best record in a ten year stretch ever, including two trips to the Super Bowl and one championship.

When Manning got hurt, the Colts immediately collapsed and became the worst team in professional football.

With Manning, the Colts are winners.

Without Manning, the Colts are losers.

Mr. Manning is certainly reviled as part of the “one percent” by members of the Left who are motivated by greed and envy. And yet Mr. Manning did so much good for Indianapolis, the city, in terms of his charitable giving and the job creation he engineered by turning them into a rabid football town.

The Left is hell-bent on bringing down the producers through comparable-worth legislation, pay equity laws, and high taxes on society’s most-productive members.

Let us instead take a lesson from Peyton Manning: let the cream rise to the top.

Is Peyton Manning worth $96 million? Yes … as long as someone is willing to pay it.