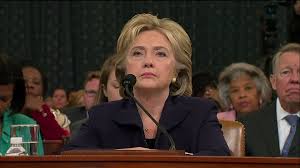 “Two of our officers were killed in Benghazi by an Al-Qaeda-like group: The Ambassador, whom I handpicked and a young communications officer on temporary duty w[ith] a wife and two young children. Very hard day and I fear more of the same tomorrow.”

This was the day our ambassador and three other Americans were killed at the hands of an ‘Al-Qaeda-like’ group in Benghazi.

Ms. Clinton sent a similar message to the Egyptian Prime Minister the next day:

“We know that the attack in Libya had nothing to do with the film. It was a planned attack—not a protest.”

The film to which she referred was an anti-Islamic film made by an American and posted on YouTube.

The Obama administration said the film enflamed Muslim souls in Libya, inciting a spontaneous demonstration leading to the death of Americans.

The decision was made, presumably by Mr. Obama, to blame America for the tragedy instead of Islamic terrorists.

These e-mails which clarify her immediate awareness of the situation in Benghazi  are new to the American public. Ms. Clinton has tried hard to keep them from us, since they expose her collusion in the shameful deceit of this administration to the American people.

The mainstream media is celebrating Clinton’s testimony before the House Commission yesterday as a triumph since she was able to keep her cool this time.

Their celebration is premature.

We now know that this ambitious politician who desperately wants to become the ‘first woman president’ colluded in blaming an American for the Benghazi mass murders to camouflage the failed foreign policy record of her State Department in the run-up to the 2012 election.

In case there was ever any doubt, candidate Hillary Clinton is now officially on record as demonstrating she’d sell her soul to advance her political career.

She is unfit to be President of the United States of America.